By Cari McGee in Tri-Cities Housing Market with 1 Comment

There’s no really pretty way to discuss this – houses under contract are waaaaay down for May, continuing a trend I’ve been watching since the beginning of the year. If you’re a seller, that’s not a stat you’re excited to hear, but it’s true nonetheless. If you’re asking ‘why’, I’ve got an educated guess that I’m going to throw out there –

Mortgages aren’t as easy to come by as they have been, ergo, fewer people are buying homes.

I was speaking with an agent from another office and he said to me, “It’s getting pretty awful out there, isn’t it?”

I replied, “What? Business?”

I was honest and told him that for me, personally, I had seen a dip earlier in the year, but for the past 6 weeks I’ve been crazily busy.

Great, Cari – what does that mean for me?

If you’re a buyer, it means that there IS a house out there for you, they’re not being snapped up as quickly, because fewer people are competing for the same house you like.

If you’re a seller, it means your house WILL sell, IF you are priced correctly and your home is in good condition, but be patient, as there are fewer qualified buyers scoping out the goods.

Check out the chart below… 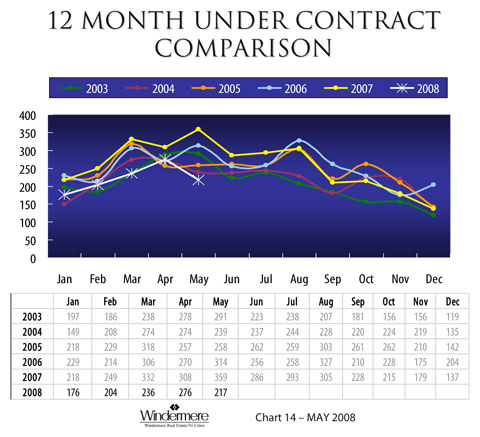 My husband and I came to the Tri-Cities in 1994, and we thought it would be a temporary stop on our way to larger cities. He was a television sports anchor at the time, and we planned to go wherever the "next step up" took us. Twenty-plus years later, we're still here and we've loved every minute of it! We have two children now, and we've found the Tri-Cities area is a wonderful place to raise a family. It's a great place to do outdoorsy things -- I like to hike Badger Mountain or run along the river path. I also love reading ... by a cozy fire in the winter or a beautiful picture window in the summer (with the A/C on!). I've been a licensed Realtor since 2004. I earned my managing broker's license in 2016, which means I can run my own brokerage, or create a team of real estate agents and supervise them, which is exactly what I did when I formed the Cari McGee Real Estate Team in 2018! We have administrative and marketing personnel, as well as additional agents to serve you. I became a director of the Tri-Cities Association of Realtors Board of Directors in 2016, became Secretary/Treasurer of the organization, and was elected to Vice President in 2019. Want to talk about real estate? Click here to schedule a meeting with me!

Get in touch anytime!

Get a free, no-obligation Home Valuation Report, which includes our 8-page guide, "75 Ways To Sell Your Home Faster."